Your basket is empty.

Your basket is empty.

It is said that the Hebrew language is very close to light language.  The letters of the Hebrew alphabet are said to coinside with the DNA and the amino acids in the body.  The letters also correspond with paths on the Tree of Life.

In search for the keys to the mysteries, the old Kabbalists discovered the names of the 72 Angels in a passage of Exodus (Ex 14, 19-21)

There are 3 verses each with 72 letters:

And the angel of God, which went before the camp of Israel, removed and went behind them: and the pillar of the cloud went from before their face and stood behind them:

And it came between the camp of the Egyptians and the camp of Israel; and it was a cloud and darkness to them, but it gave light by night to these: so that the one came not near the other all the night.

And Moses stretched out his hand over the sea; and the LORD caused the sea to go back by a strong east wind all that night, and made the sea dry land, and the waters were divided.

This technique of Naming of the 72 Angels is called Notariation.  You get the sacred root of the 72 angels name in taking one letter from each verse and combining it with a letter of the two others.  If one takes the first letter from the front and the second from the back and the third from the front, then you will build up this table: 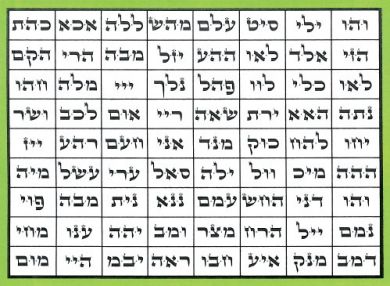 Please note that the Hebrew letters are written and read from right to left.

There is no difference between capital and non capitals, but 5 letters have a particular form if they stand at the end of a word.  All letters are consonants, this had allowed an ambiguity of interpretation and pronunciation, but because the knowing of the sacred Hebrew language diminished the "Nikkud", a system of little points and lines is used today to help the identification of vowels.  But there are still a lot of very complicated rules for reading the biblical words.

The suffix - el or iah was added to make up the completion of the name.

The suffix - el has an emissive quality with the attributes positive, masculine, strong.

The suffix - iah has a receptive quality with the attributes negative, feminine, material.

Soma Kabbalists add 4 different suffix in relation to the points of the compass:

Enter your email address to receive our newsletter!